My husband and I recently took a backroads trip across the country. We avoided the interstates with their urban bypasses as much as possible, choosing instead the old US highways which usually pass right down the main streets of whatever population centers are strung along their path.  Sadly, business goes where people are, and if there are more travelers on the interstate than on the highway, that’s where the services go.  And the downtown businesses which comprised the community core then wither, and their buildings rot, and there is no there there.
Often, very often, the city governments have misdiagnosed the problem.  In the 50’s and 60’s it was imagined to be all about parking.  People went to the suburban strip malls because it was easy to park, they thought.  So the city managers gutted the city center,tearing down the historic structures which gave it personality, and replaced those structures with parking lots.

I’m talking about Parkersburg, West Virginia. In its heyday, the center of town was a fantasy of Romanesque architecture in red brick or gray stone, each structure striving to reach the heights via a spire (if it was a church) or a clock tower (if it was a civic building),  The history book in our hotel showed picture after picture of these wonderful buildings, but most were captioned “… abandoned in the 50’s.” “…gutted by fire of unknown origin after standing empty for some time.” “…razed unceremoniously in the 70’s despite citizen and local historian’s outraged protest.”  I noted the locations where these buildings had stood and checked them out.  Parking lots, all. And all empty.  Only three buildings remained of the many pictured. There is no there there.
I’m talking about Sunnyvale, California. In the 1950’s Murphy Avenue was the main street of Sunnyvale, and boasted a department store and a number of other retail shops.  Adjacent to Murphy Avenue was a  Town and Country Village shopping center, with wide overhanging eaves and benches to encourage lingering in the shade.  But in the 60’s competition from the new Stanford Mall was extreme.  So the city fathers decided to create the Sunnyvale Town Center enclosed mall, and in doing so they cut off Murphy Avenue and converted it to a parking lot for the new mall.  Fifty years later the Town and Country Village has been razed and replaced with apartments, and the Town Centre struggles on its third set of anchor stores, which are almost impossible to find behind their multistory parking garages.  Against all odds, the three block vestige of Murphy Avenue is pulsing with lively restaurants and shops.  There is little else there.

I’m not talking about my own hometown of Los Altos… yet.  But when I approach Main Street on the expressway which replaced the railroad tracks along First Street,  I worry.  Formerly drivers on the expressway could glance over and look down Main Street and along First Street, and if they were intrigued by the small-town look of the many 1920’s era buildings, they could take the next exit and follow their urge to explore.  But that’s not going to happen any more.  There is a four story Great Wall which barricades the town against any casual glance.  The Great Wall of Los Altos includes two huge new apartment complexes and “one of only two podium-style Safeway markets in the state.” (Podium – style means parking on the first floor, shopping  in a high-ceilinged market at the tope of an escalator, and storage on the floors above.)
No matter how much ivy and bougainvillea is trained up the Great Wall to soften it, there is no way to see through the Wall to the charming streets behind it.  If fewer people shop in Los Altos in the next months and years, it’s not because of the lack of parking.  It’s because they will have no way to know what is there. 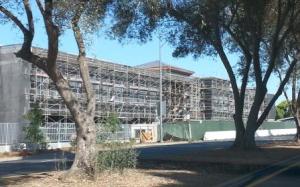